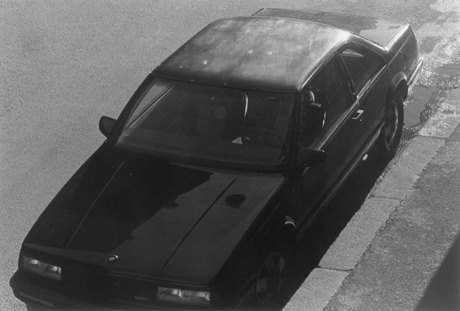 I never met Tom Sandberg but I meet his pictures everywhere. His sad death coincides with my having spent the last three days walking the outlying streets of Oslo with an old camera, needing to make some pictures; to see the city as never before, parts of it I’ve never been before. All the odd stuff I looked at through the viewfinder, the iron plates of the sort road workers lay over large holes in the asphalt; other stuff, sewage pipes, white winter berries with nothing behind them, cars. Whatever I looked at I thought to myself: “that’s too much like a Tom Sandberg picture, better leave it alone”. Of course I shot some frames but the iron plate really disturbed me. The dark wetness you only get when snow is melting and the sky is grey, makes dark things like wet iron plates the most attractive photographs around. Sandberg’s pictures in my mind are not obviously Norwegian, and yet I never had a Sandberg issue anywhere else in the world, except perhaps on airplanes, he owns airplanes. How can it be that an artist can capture a city without showing any of it? Because he was under it’s skin, he knew and was of this part of Norway so why show us what we already know? He photographed the soul of this town and deprived us of the easy satisfaction of our sentimental cravings; even when he was not here, he was photographing this place. Nobody has done it better or probably ever will.


On behalf of Noplace