ON ASCENDING AND DESCENDING OR SOMETHING IN BETWEEN 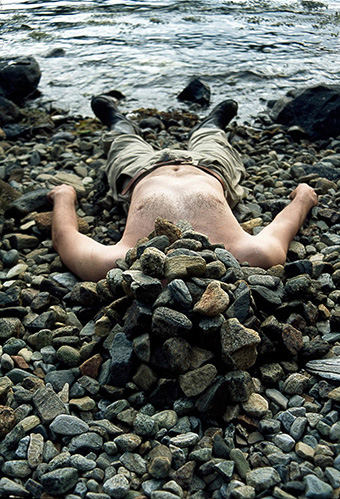 I picture Sigmund placing a cobblestone on the floor. He moves it a bit. It lies by a pile of other stones. He finds a new stone and puts it by the first cobblestone. He takes stones from one pile and places them on a new one, carefully but determinedly. He continues like this until he encounters an uneven cobblestone that he puts on top. It falls down, so he tries again. He fetches a new stone. That falls down. Sigmund blabbers to himself. Somebody is laughing. The stone settles close to a midpoint. The new pile of cobblestones is reminding of a pyramid. Sigmund keeps on building. The pyramid turns into a pillar. Stones are falling down. Sigmund keeps building upwards. The column changes shape. Perhaps Sigmund is changing his plan. He keeps going from the old pile of stones to the new pile, focused on reinforcing his plan.

Obtain an act. Trying to complete a thought. Examine the next footstep by taking a step forward. See what happens. Get it on track. Do something purposefully, but not knowing why. Try, again. Once more. Anew. Continue. Start up again. Do. Anew-too. Now. Now!


Sculpture with object.
Object as sculpture.
Sculpture as object.
Sculpture in object.
[in] object + sculpture
An object with two things.


Absurd, apparently meaningless actions. But the purpose is not absurd. It is tangible. It has substance. It takes courage to follow a banal action. The depletion is will-work. It is great exertion. Ponderings. A progressive Sisyphus act. As Albert Camus points out Sisyphus must have had both good and bad days. So, while Sisyphus went down to retrieve the rock again, perhaps he felt complacent. Perhaps he thought: All actions are absurd when all comes to an end.

In September 12 years ago a Norwegian set the standing world record in grape spitting. Nearly nine meters he spat, according to Guinness World Records. 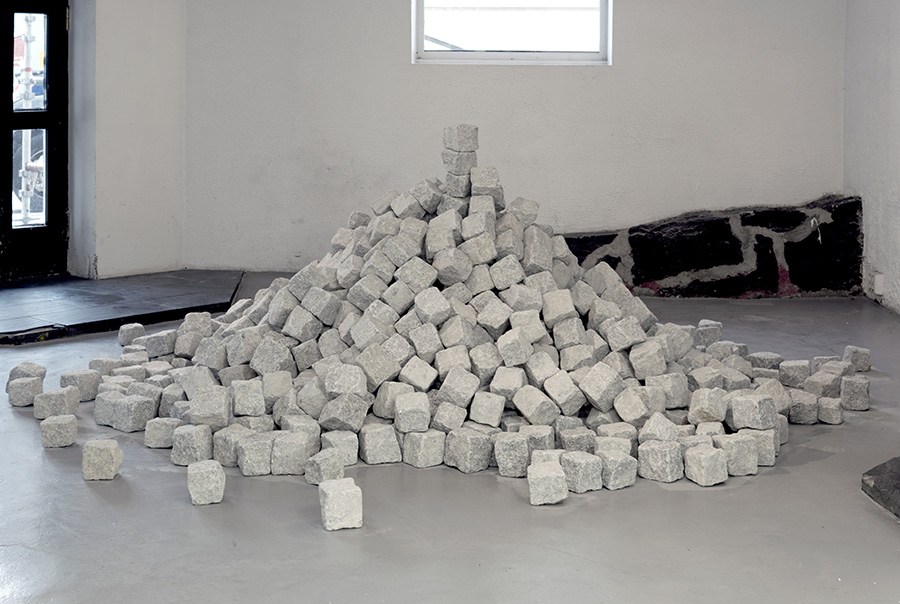 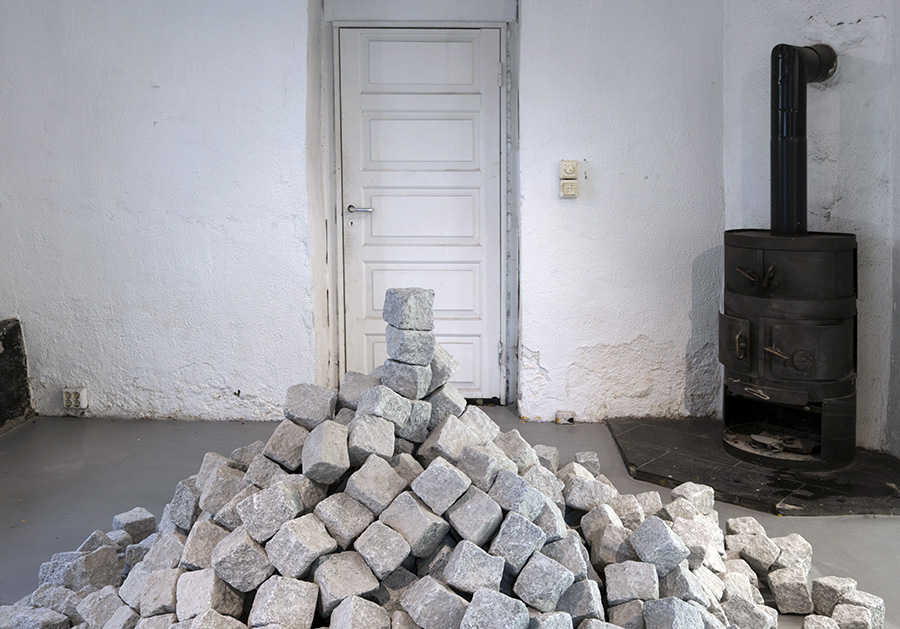 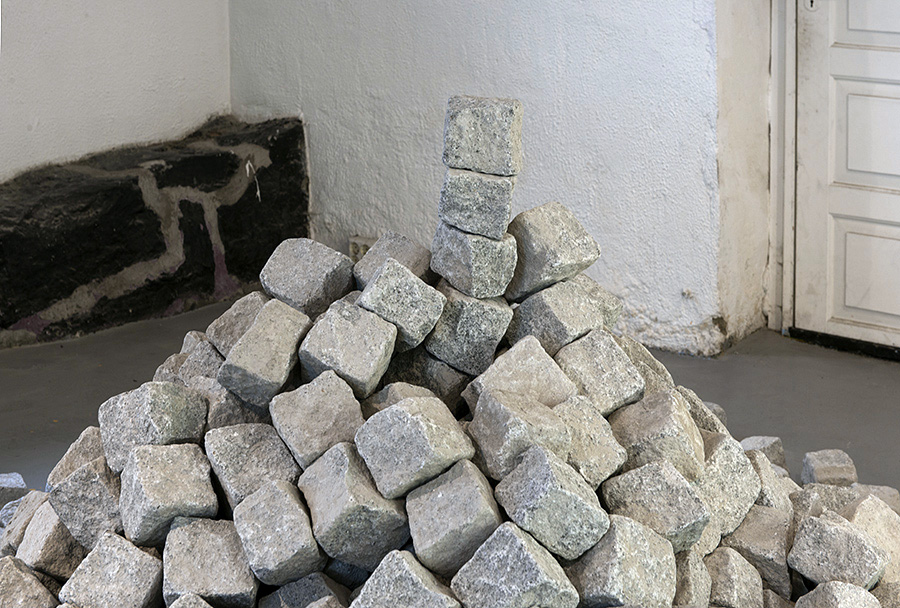 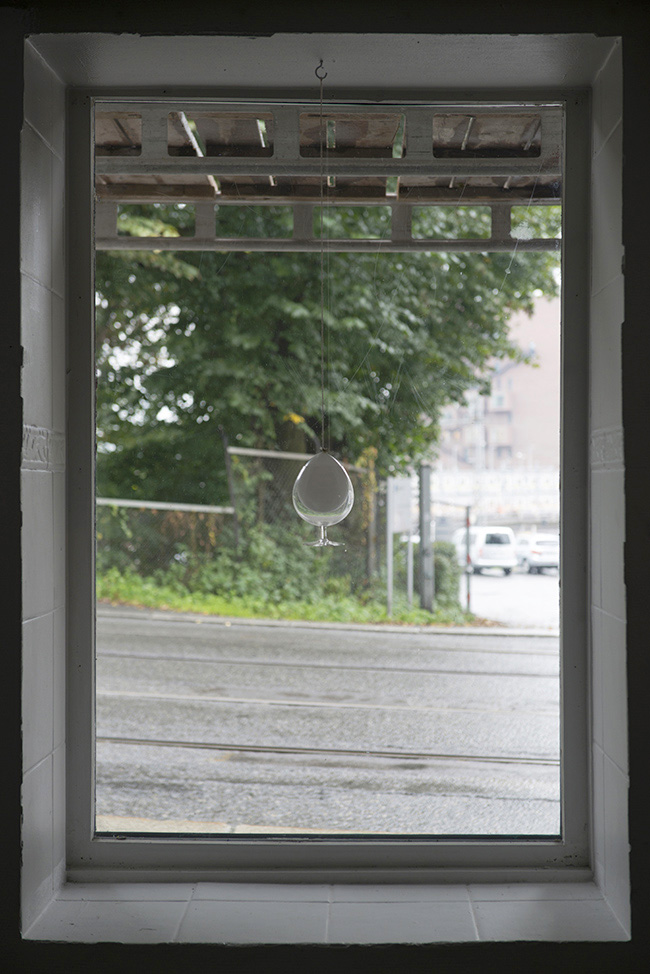 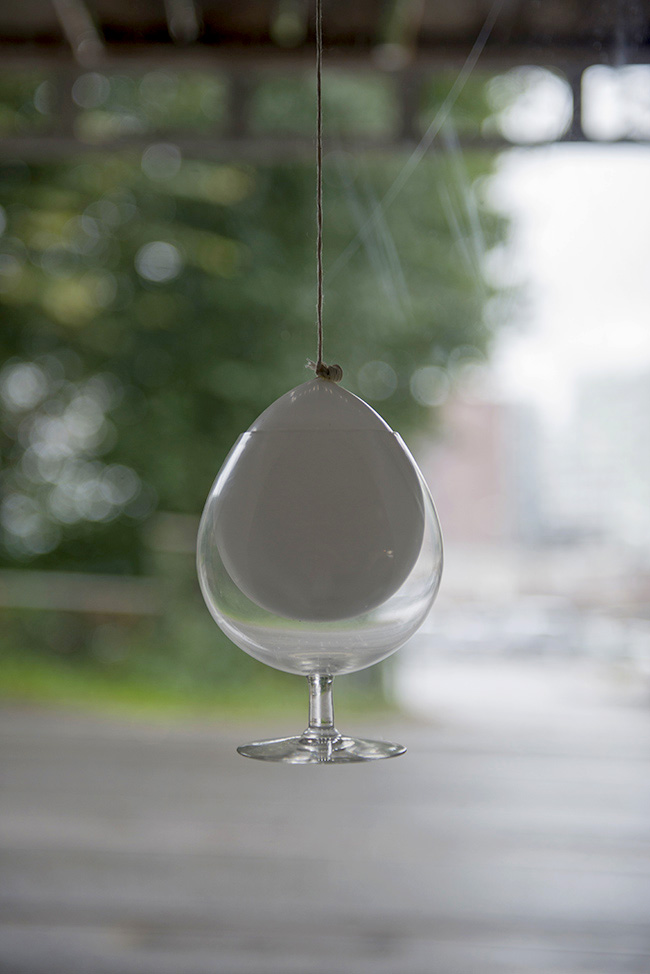 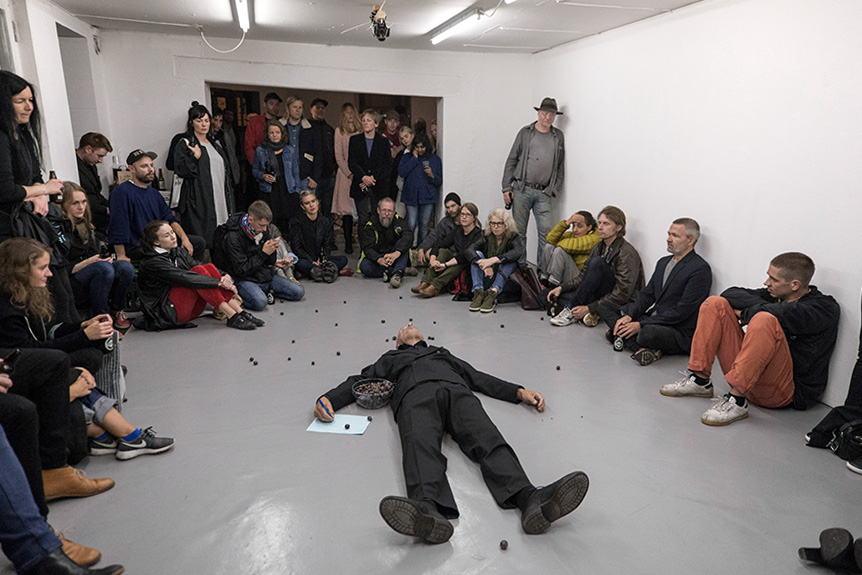 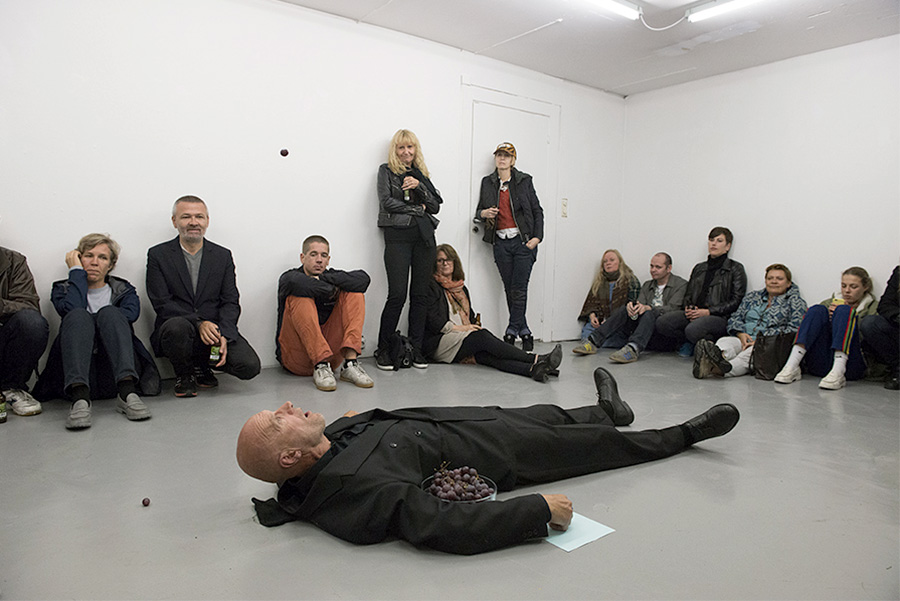 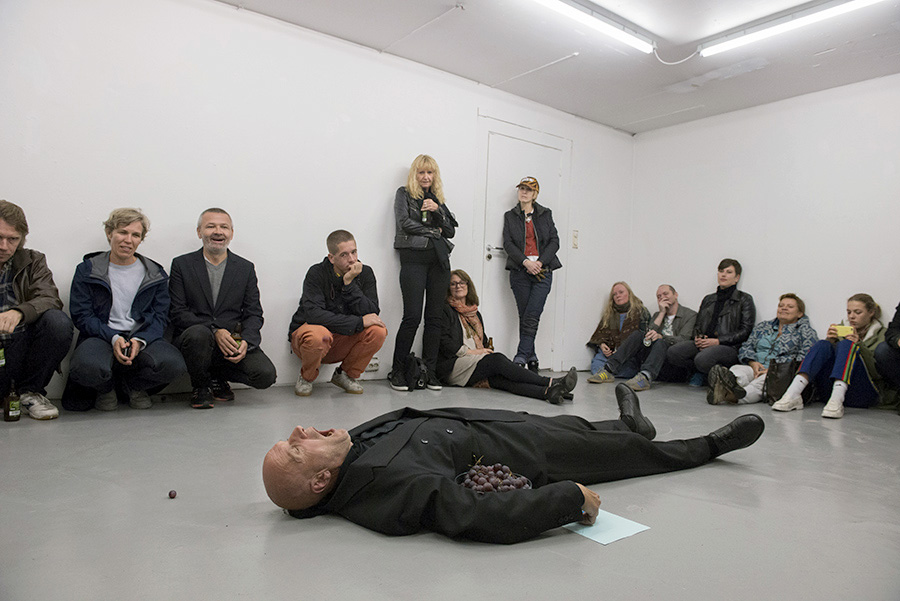 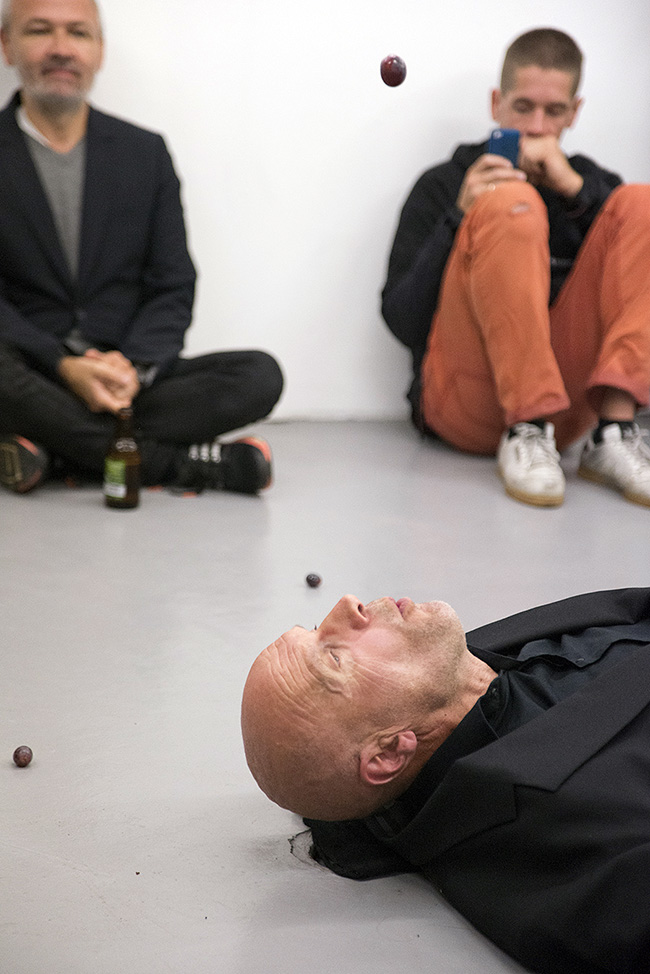 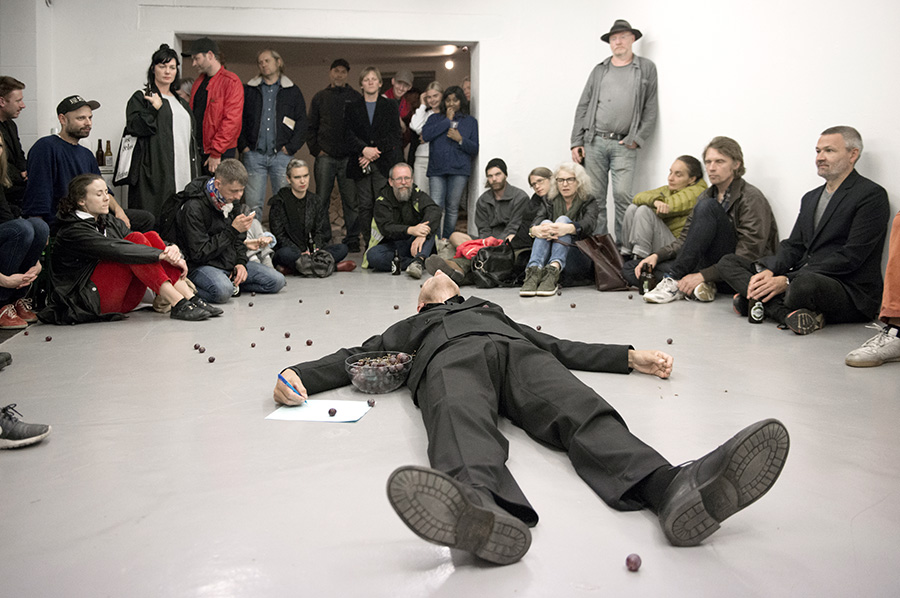 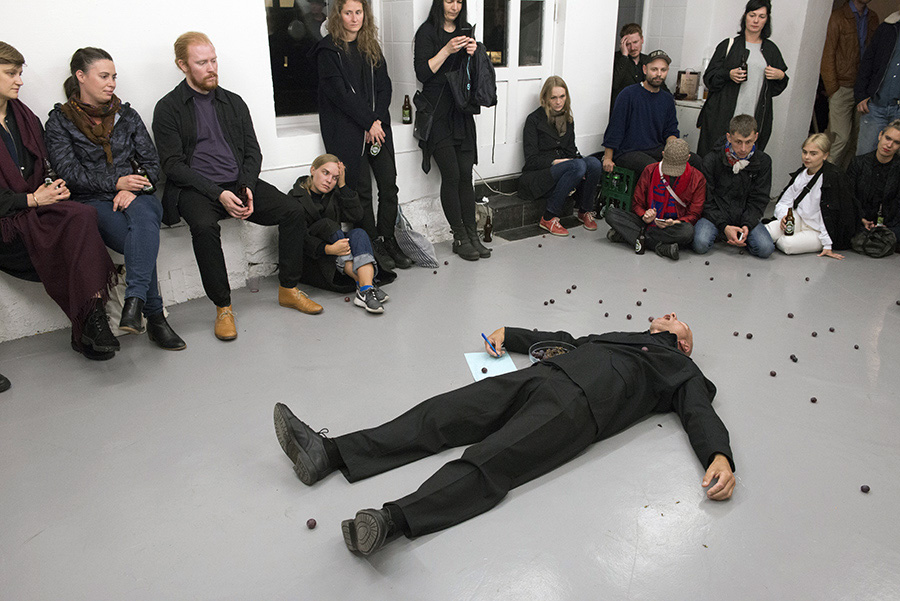 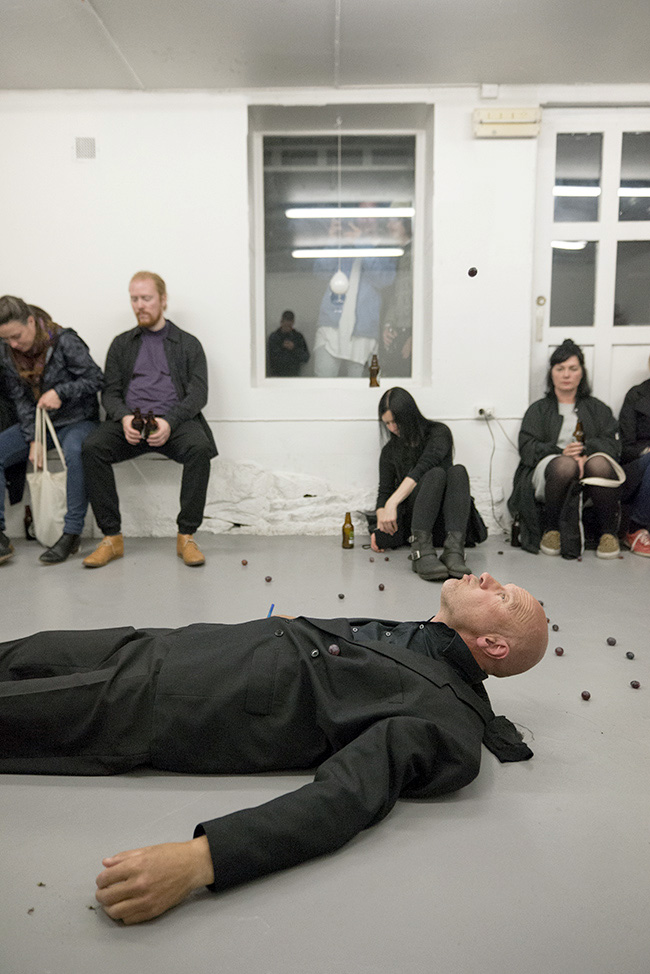 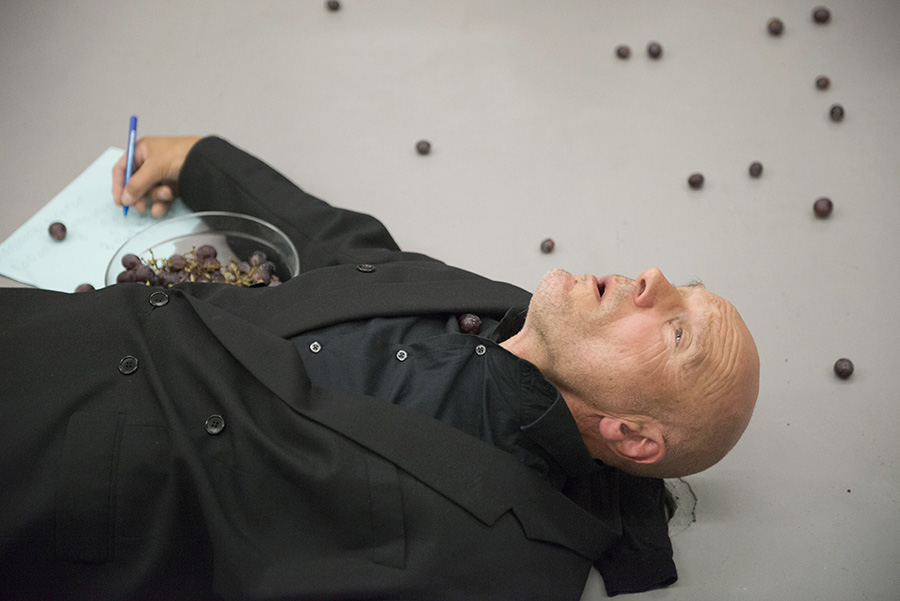 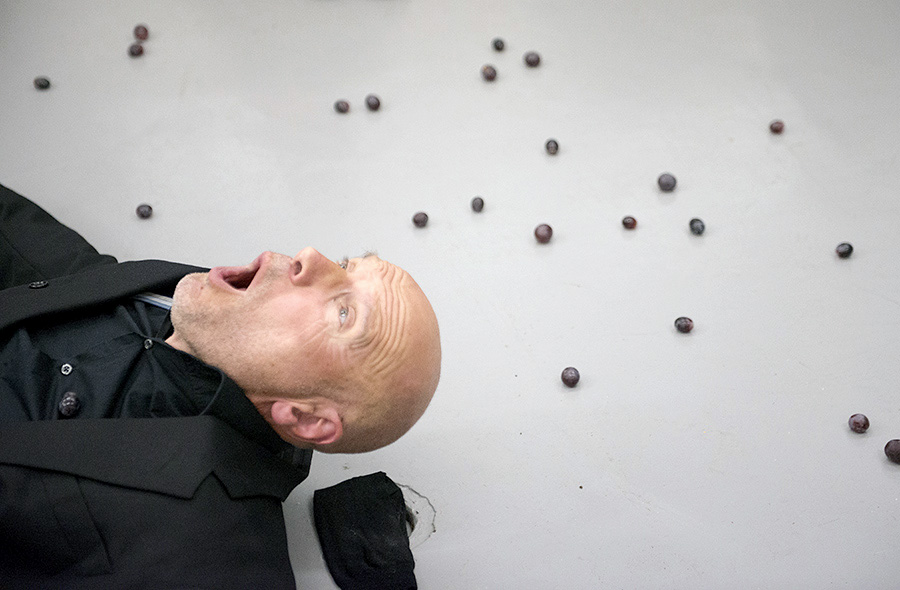 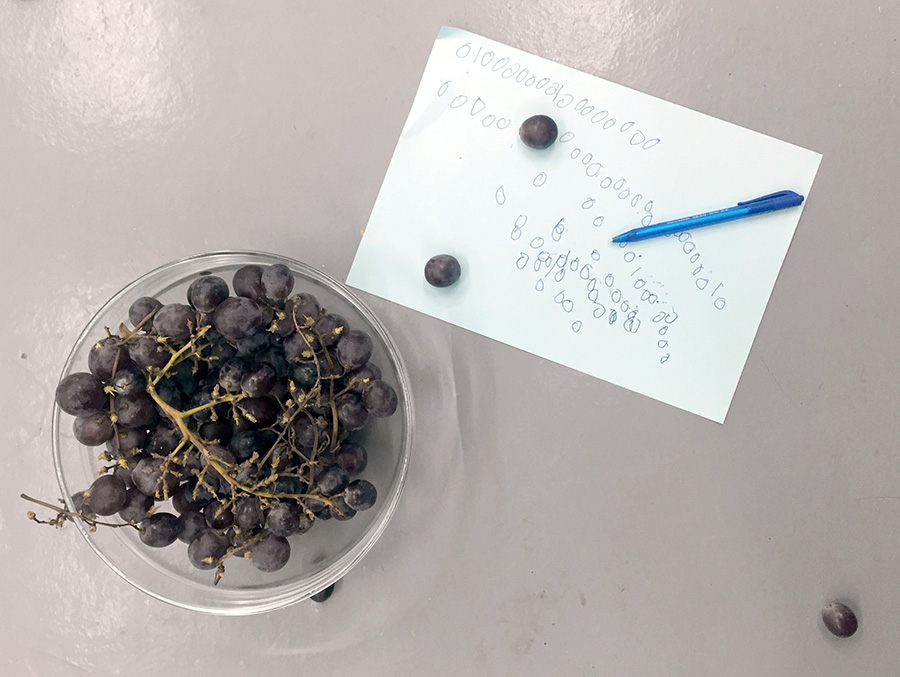 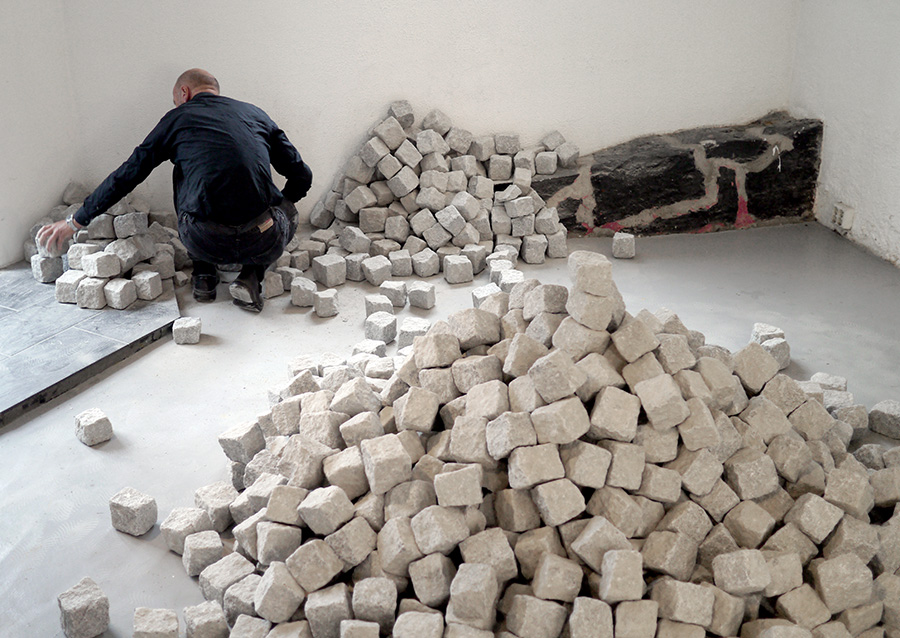 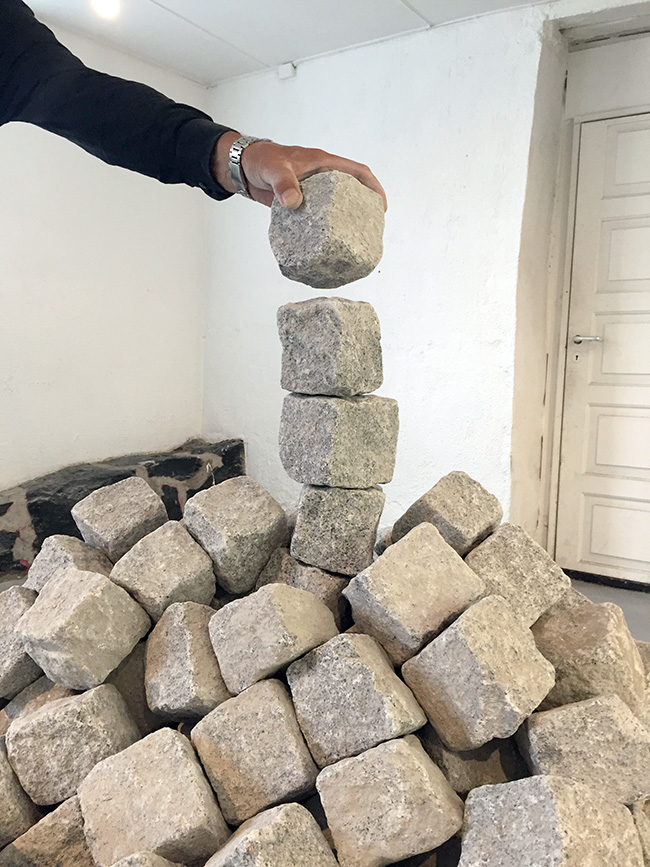 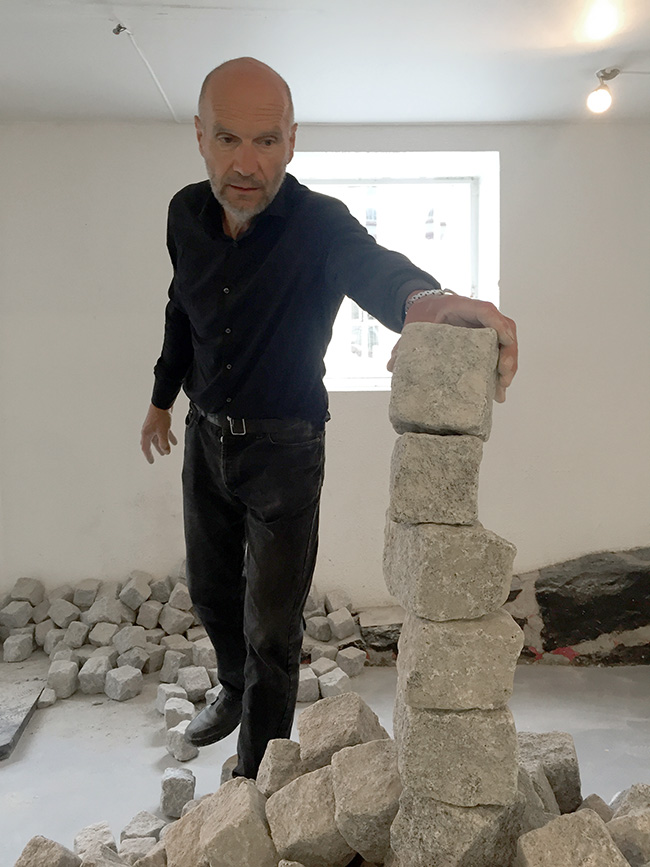 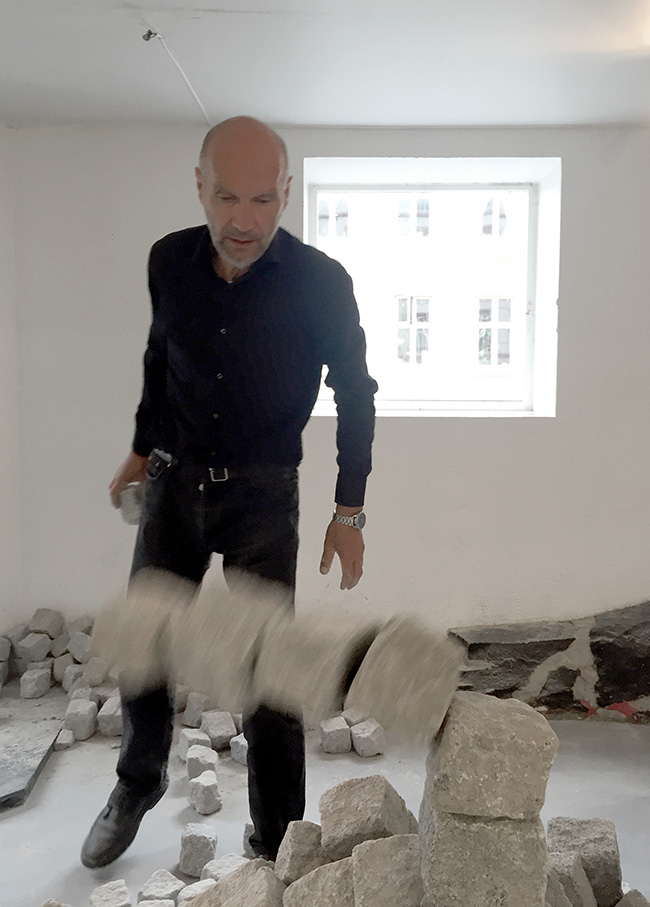 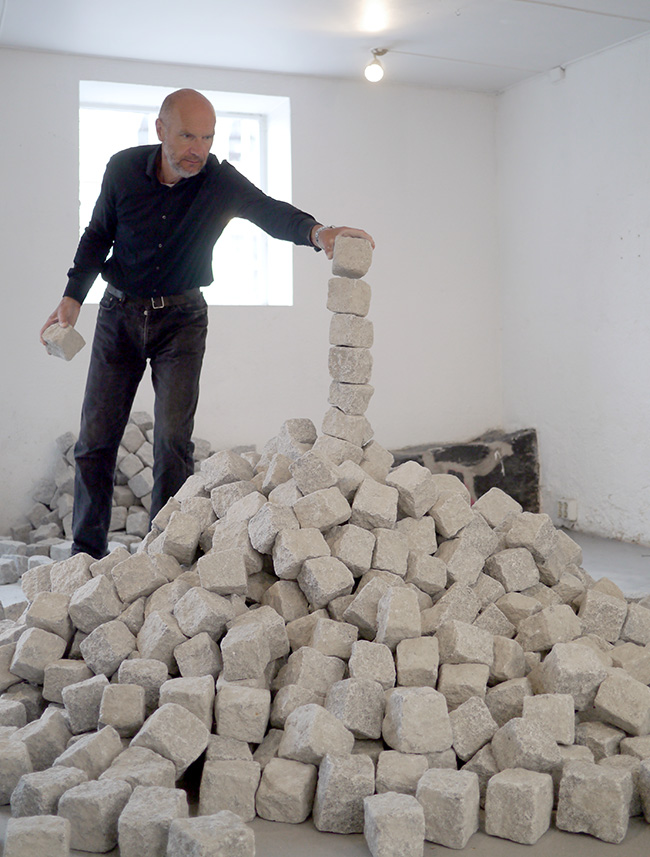 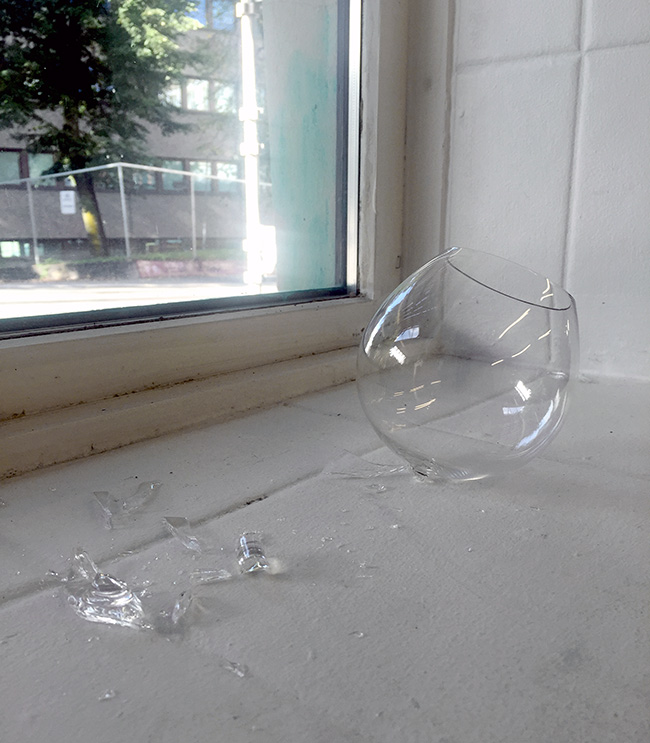