TO NO WHERE
Oslo project part 1 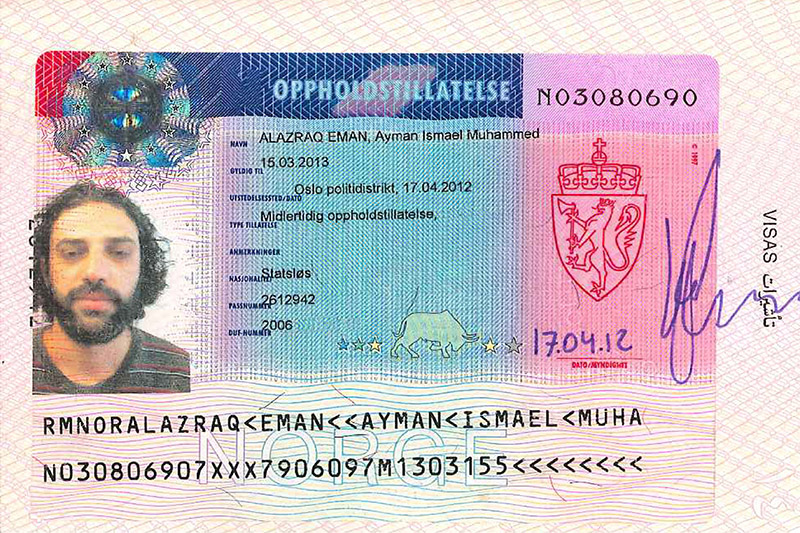 
In 1993 was the first time I heard the word Oslo, mentioned in conjunction with the Oslo accord -the peace agreement between Israel and Palestine that was brokered in Oslo. At that time Oslo did not mean the capital of Norway to me, neither did the agreement itself make much sense to me at that time. To me it just meant that I would have a passport and be able to travel around the world.

When you sit down in that seat, in that plane, with your body, moving from one time zone to another you know you will automatically perceive things differently when you arrive than before you left. But how does it feel to sit down in that seat when you know that your move will be permanent. When you know there is no going back. When your perception of the place you are leaving is softly crumbling, a memory already; and this new time zone and this new geographic area and culture will also be the new you.

I still remember that someone told me now after Oslo you will be able to have breakfast in Palestine, lunch in Jordan and dinner wherever you want in the world. Unfortunately nothing changes on the ground, on the contrary things became more difficult and areas became smaller and smaller.

We carry our home countries like weights, chained to our mother language, we perceive ourselves not only as me but also as us. All people regardless of nationality have certain obvious similarities: We all drink, sleep, eat and try. Try to work, try to get laid, trying to get work, maybe one day a family, trying to stay sane in a world going insane. So what is it like to come from a country that doesn't enjoy status as a country, to the country that has the most status as a country at this moment in time. Shifted from a place where you had no rights to a place where having all rights is the norm, only to realize that those rights do not apply to you. How do you cope with that paradox, where do you go and how do you belong?

13 years later, Oslo appears again in my life. I get a scholarship from the Norwegian authorities to study in Oslo. This time Oslo is giving me the chance to travel. I had to travel through Jordan, but first I had to cross the boarders where I passed the Israeli security then the Jordanian security, after that I went to the airport in Amman where I went through security once more and finally I was on the flight to Oslo.

Immediately pragmatic questions arise: How will I find my way in this new scenario? Unlike a tourist, the interactions you are faced with in a short span of time will not be recreational, but might build the premises of what will become your new life. Should, you buy into the customs that apply within the communities you are now entrenched in, thus discarding your culture and therefore your self. Or should you stick with what is yours and force your surroundings to not only accept your presence, but also your history. These are chronic concerns that will have lifelong implications when you are a permanent alien. Your attitude (and your luck) will decide if this new place will be a noplace or a myplace, a utopia you will never fully grasp or a garden of culture where you’ll be able to plant new seeds.

Oslo was so green and full of water, that was the first image i got to Oslo when the plane was landing. Even if it was a rainy day it was nice. On that day I get lost in the city while searching for the art academy.during my search i get help from the people in the streets, I get an impression that people in Oslo are really nice and helpful people.

“Be aware of pickpockets.” A phrase all too common in the area of Oslo where immigrants, most of them with Norwegian passports, leave or enter the vessel of public transport. All places are prejudiced towards new arrivers, and all new arrivers will be prejudiced towards a new place. The question is whether you will let those mirages define your view, or if you will connect. This nation Norway, the utopian nation of peace hungry diplomats faces problems that naturally will be harder to decipher than do more disorganized societies. Two summers ago we were reminded that the capitol and the country in its entirety was able to foster and obscure a severe darkness that resulted in one of the most extreme acts of violence in the western world since WW2. What took is easy to criticize when you don’t make the problem yours, but you will handle it with more care when you wish to become a real part of this society, and thus the problem will also be a part of you, and therefore you a part of the problem. When you come to a new place, you escape or distance yourself from the problems of the place you left, and this new place should ideally not be about problems, but potential.

It was a great surprise for me when i realized how the fjord is so close to the city center. I had not seen the sea for the last nine years in my life, so I used to go to Aker brygge every day for more than a week.

You are the history of the sphere where you were born, but by entering a new sphere you will be the creator of that sphere. Through investigation that will seem superfluous to a native, you are applying a new hue with an autonomous integrity to this worn out, blank canvas. It’s important to distinguish between where you are from (and thus what you are) and what you want to become. To be a new arriver will often feel like standing on a railway station seeing people come and go, moving naturally through space, while you are going nowhere,frozen and stuck. For every plateau you jump there is another door that will lead to a new plateau, with a new door to open. Each door that you open teaches you new insights. Each door also leads you away from your history – towards a new self.

Immigration creates its own socialism that knows no bounds. Here we are dealing with a universal socialism of basics, not a political one. The fastest growing city in the western world is also a city that lately has been facing challenges of internationalization. As longs as we meet these changes with a remorseless foregoing of privileges, we will be able to generate a new type of culture that does not only function as a preservation of local history, but which also generates a stimulus for cultural innovation. This is the challenge for any community, grand or small, and if you start seeking and investigating, preserving and protecting, but at the same time resample and mix, twist and turn the premises, encouraging differences while strengthening them, you are creating fertile soil. You are preparing the grounds for a culture that will be able to transcend the old one, while at the same time pay tribute to our forefathers. It might seem impossible, but it’s not. Where the name “Oslo” comes from nobody knows for sure. The closest we have come to an interpretation is: “Old Gods” combined with “plain fields.” There is both potential and history in that name.

I still don’t have a passport.

You are nothing at all when put yourself above it all, Oslo. If you rise you will fall. The Oslo agreement proved that by trying to help someone you might give them the impression that they can’t help themselves. Still you have to reach out to help. We are not that tall. We are face to face. Eye to eye. In one world. More and more deeply intertwined. 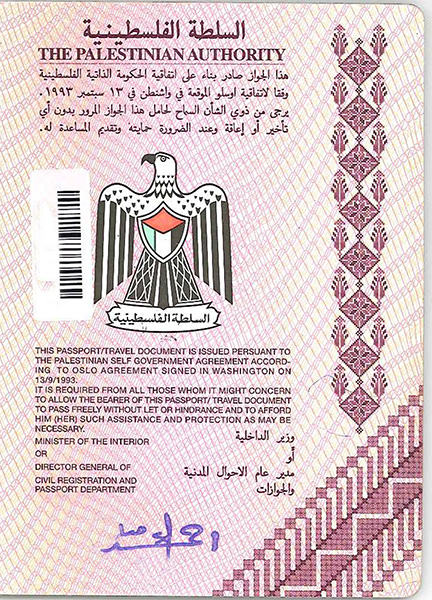 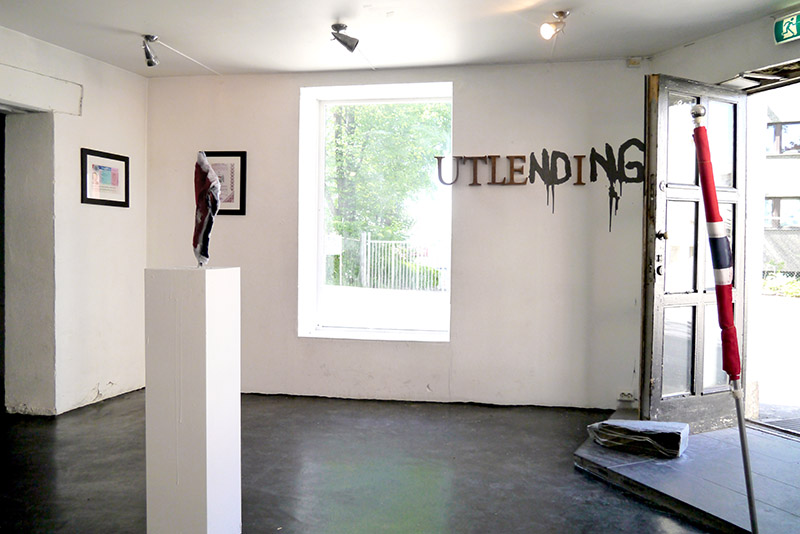 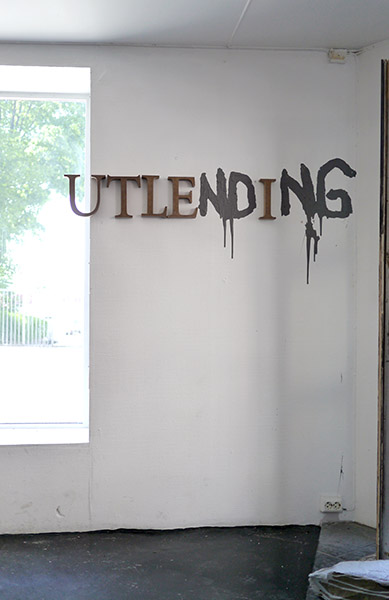 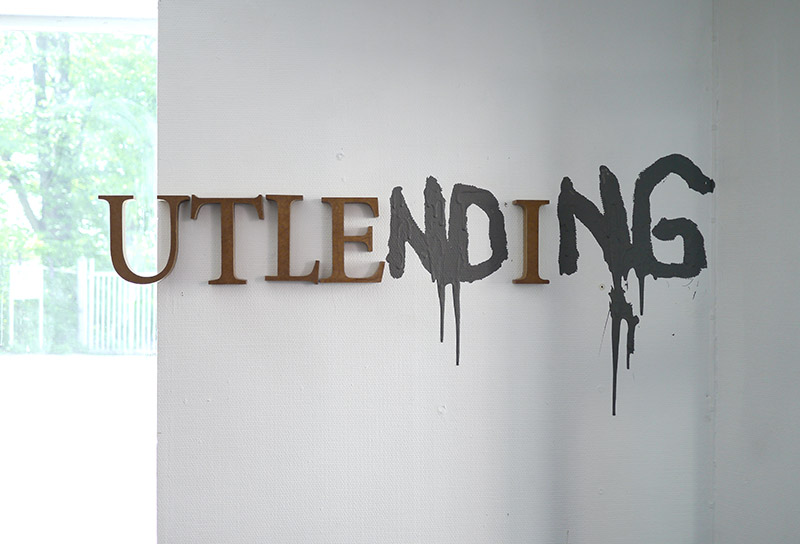 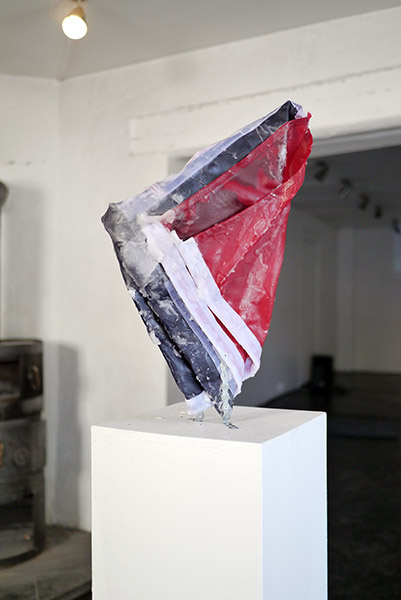 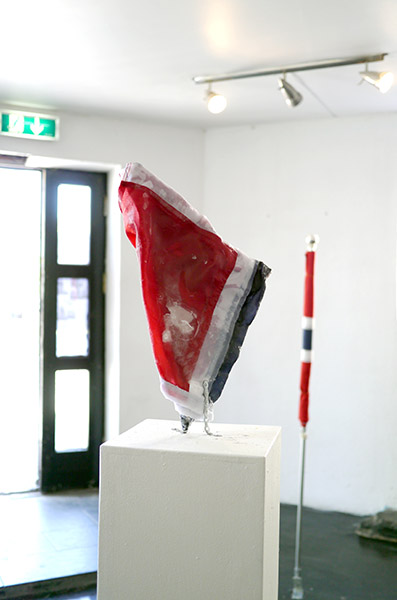 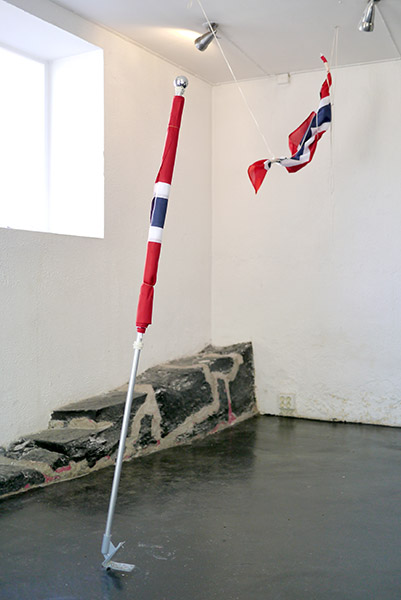 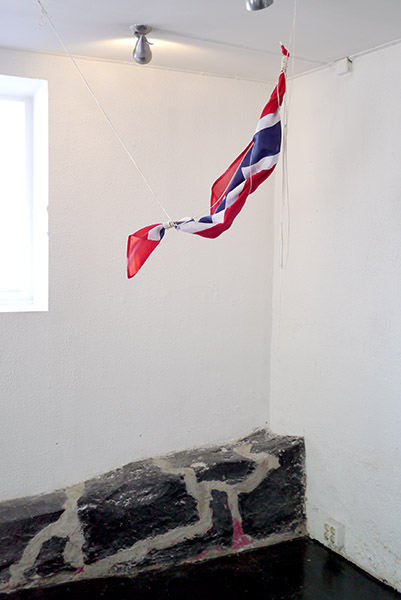 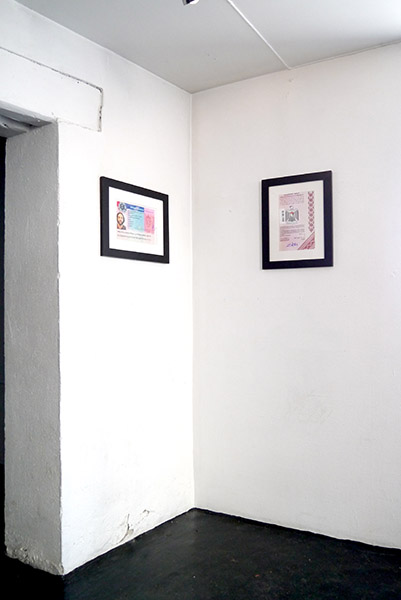 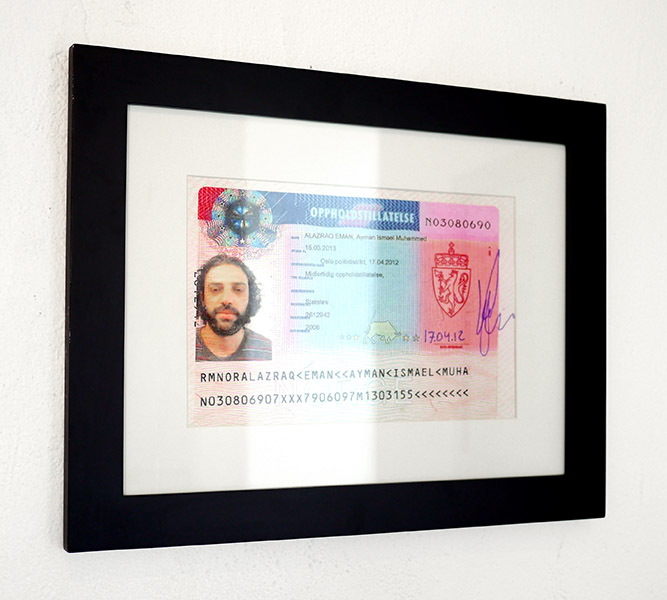 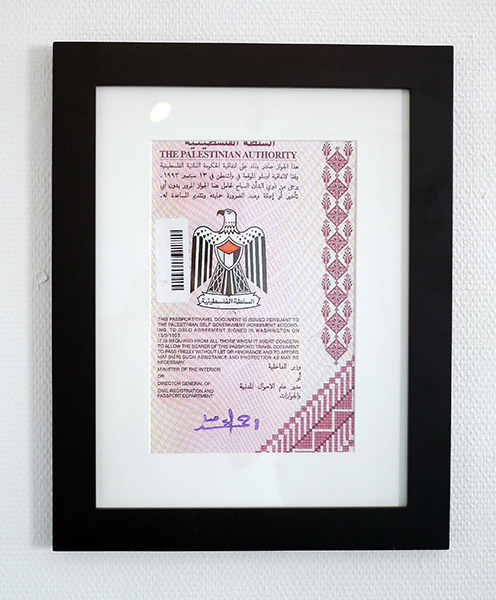 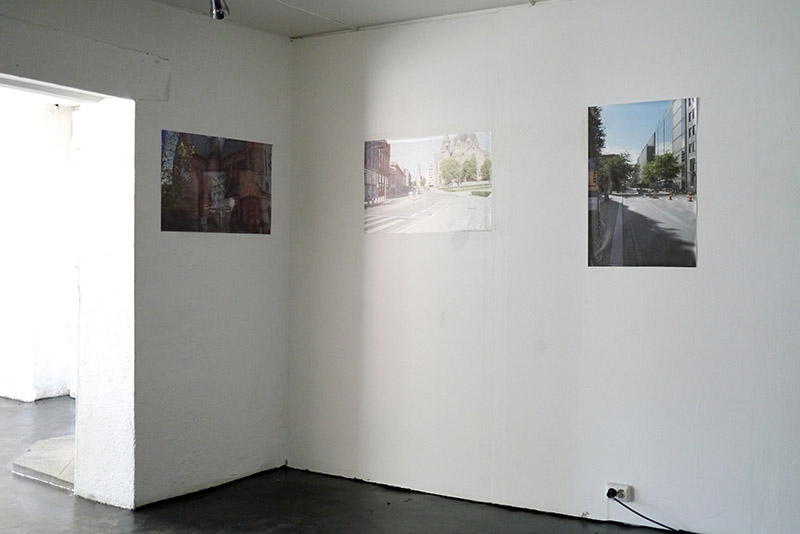 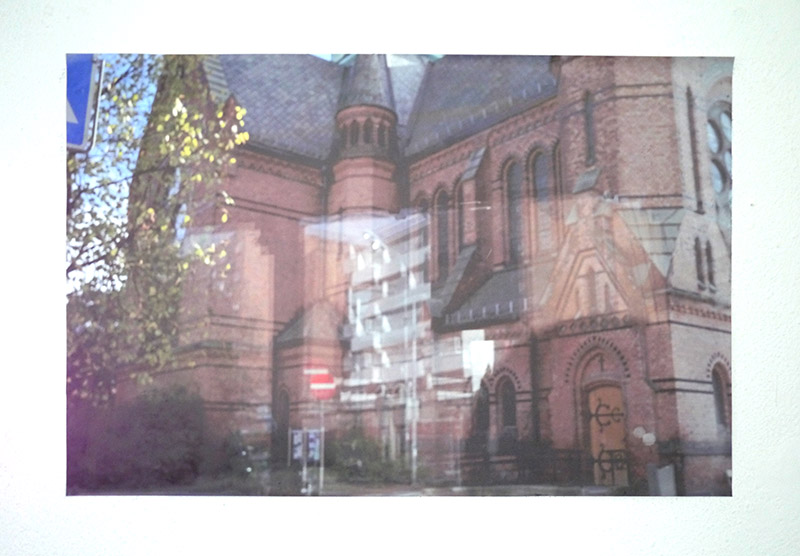 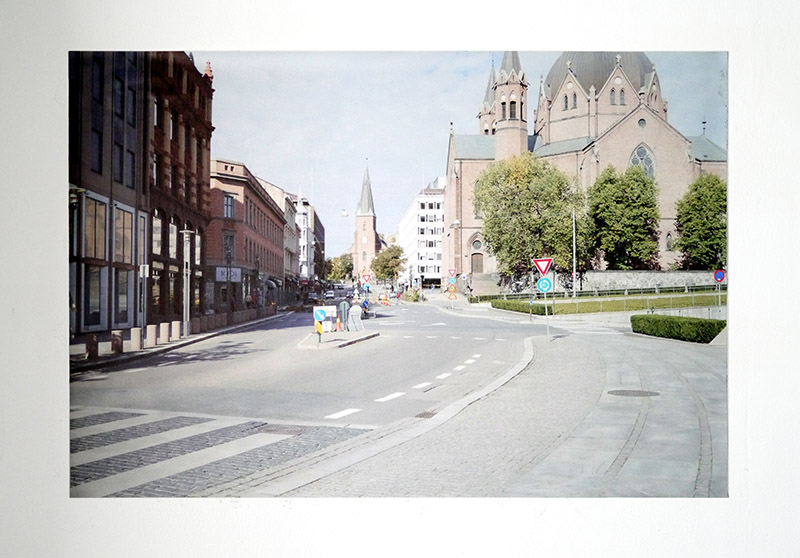 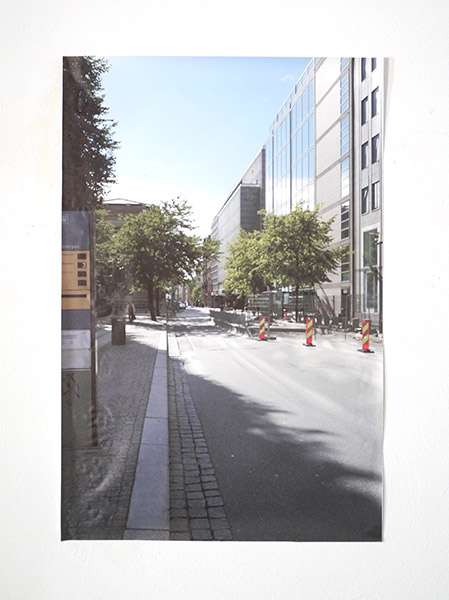 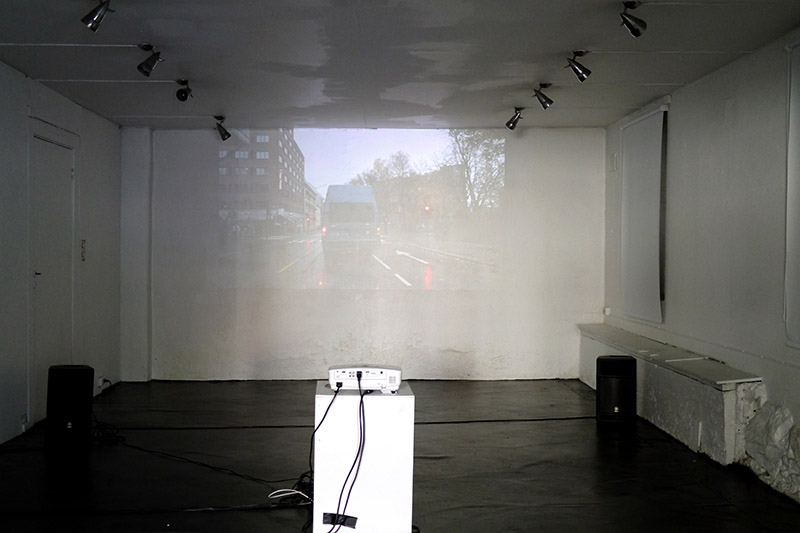 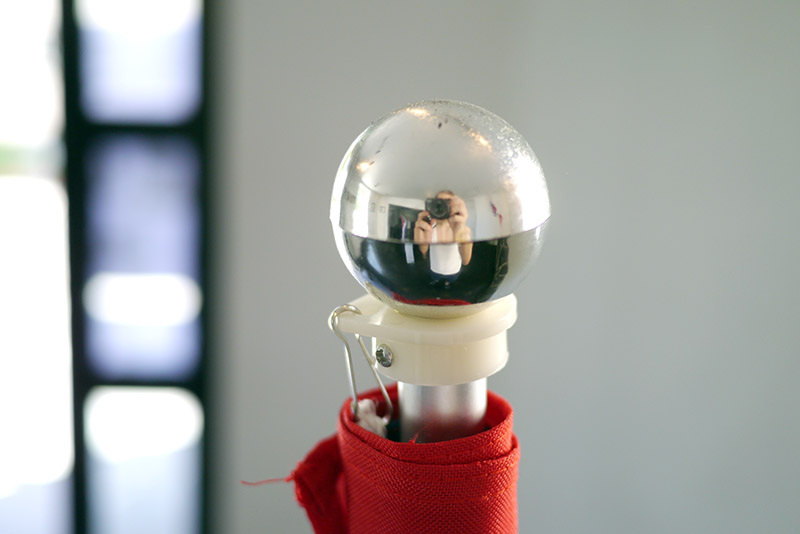 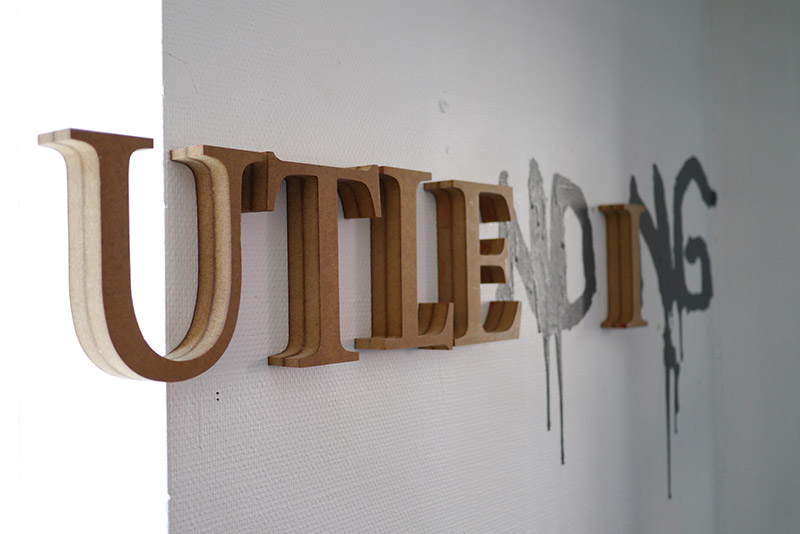